Imagine Dragons, 10 years in the making, has debuted their new album called "Origins". 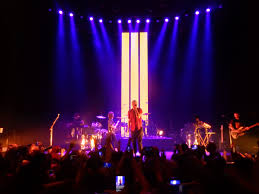 Imagine Dragons, 10 years in the making, has debuted their new album called “Origins”. With lead singer and guitarist Dan Reynolds, Daniel Wayne Sermon on cellos, Ben McKee on bass guitar, and Daniel Platzman with the drum kit, we are sure in for some outstanding alternative and rock.

Natural: My second favorite in the entire album. The beginning I feel like is a perfect transition and introduction to what Imagine Dragons sounds like as a group. It’s a very powerful and moving song that separates itself from the rest of the album.

Boomerang: This song may not be my favorite, but it has a very tropical and summer vibe and calming compared to most of their songs.

Machine: My favorite in the entire album. I love the beginning and the mechanic sounds that go with it. It starts off calm, soon only getting faster paced with more passion.

Cool Out: The beginning is alright at first, but it is a good song for chilling at home or in your backyard on a summer’s day.

Bad Liar: This song is beautiful lyrics wise. The background noises and the music itself is outstanding. Dan Reynolds voice seals the deal for me in this song. This song is definitely tied with Natural in my personal ranking.

West Coast: The type of song for a road trip with a nice guitar beginning.

Zero: A playful and catchy song that you can both dance and sing to. A story about someone who wants to be more than what they are.

Bullet in a Gun: The beginning is not my overall favorite but it is tolerable. It’s pretty confusing and seems to be everywhere. Not a go to song. It can be catchy during some parts, though.

Digital: I love the beginning with the guitar but then it gets a little messy with the digital sound effects which makes sense overall. I like the lyrics, but not with the background sound effects. However, I love the pre-chorus and the chorus.

Only: The beginning gives me an 80’s vibe which is nice. Catchy lyrics are a bonus. I’m not the biggest fan of the electro/dance that’s a part of it, but you grow attached to it the more you listen.

Stuck: A very slow and chill song. I love his voice in this one and that slight rustic tone he has in it.

Love: The simplicity of the background music and noise is very nice as it is not overly too much. A simple song for a simple day. Really shows how Imagine Dragons style is and appeals to an overall audience.

Birds: The beginning doesn’t catch me in right away, but hearing it a second time you will learn to love it. This one is also a simple one with beautiful lyrics.

Burn Out: I love the beginning which is amazing. Overall the song has many different levels and hits each one perfectly

Real Life: It reminds me of adventure and the fact that the lyrics have so much meaning, it makes it so realistic. The message is this song is definitely something to look for when listening

Born to be Yours: The lyrics and background music is very nice. However, I’m not the biggest fan of the electro/dance part all by itself but it makes sense since Kygo helped create it.

Overall, this album is both amazing and interesting. There is a song on here for everyone, whether you’re an Imagine Dragons fan or not. They always blow me away with their new music, and they did just that with this new album.