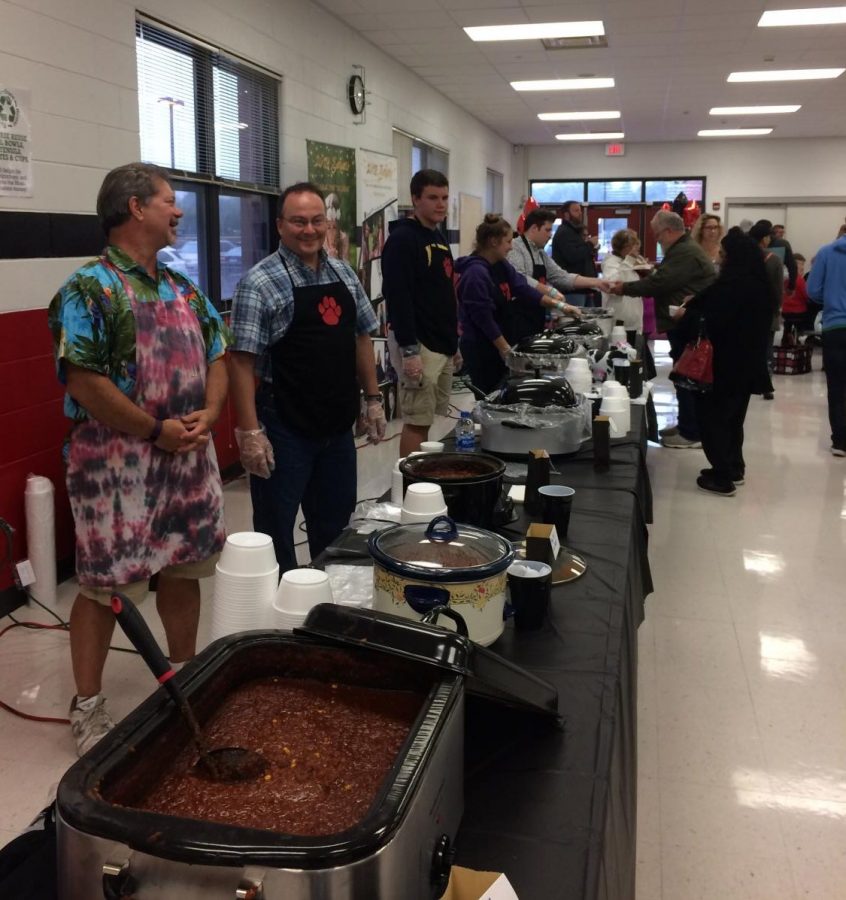 Step right up! Parents and students alike line up their tables for the annual Red Paw Chili Supper. Which Chili was YOUR favorite?

The Red Paw Chili Supper is a fundraiser held by the Yorkville Music Boosters to raise money for the music department of the Yorkville school district, who can then use this money for students involved in the various music groups established in the schools. Families throughout the district provide the wide variety of chilis made available to attendees, while the high school band, orchestra, and choir ensembles provide entertainment; in addition, those present can purchase tickets to enter into drawings for several raffle baskets with numerous prizes. This year, a record number of 26 chilis were donated for the event.

While the chilis made for the event are primarily meant to satisfy all who donated to the Music Boosters by purchasing a ticket, there is an additional and prominent competitive element to the chili supper. Each attendee is given a ballot upon entering the school which they can use to vote for their favorite chili of the ones that they tasted throughout the evening, further encouraging those who donate chili to provide their very best cooking. This year’s most voted chili was the Kleyweg Family’s Bar-b-que Chili, followed by the Zub Family’s Chipotle Steak Chili in second place and the Schmidt Family’s Fantasmic Chili as well as choir teachers Mr. Martinez’s and Mrs. Vivich’s Singer’s Chili which tied for third.

On the entertainment side of the event, the supper began with performances by a few band and percussion ensembles, including a Horn Quartet, Sax Quartet, Drum Line, and Clarinet Choir. Next, the Chamber Strings played a variety of Halloween-themed music such as The Evil Eye and the Hideous Heart, a piece based on Edgar Allen Poe’s The Tell Tale Heart, and the theme of The Addams Family. The following music sung by the Madrigals stood heavily juxtaposed to the previous selection, being comprised of more holiday and Christmas themed songs; the Madrigals will perform later this year for their annual Madrigal Dinners on Dec. 1-3.

After the actual supper had ended, those remaining at the event moved to the gym for a finale presented by the Marching Foxes. After a performance of the Marching Foxes Cadence, featuring the Marching Foxes Drumline, the band played different pieces that they have performed throughout their season, from William Tell and the Star Spangled Banner to selections from “Disney’s Fantasmic.”

Unfortunately, upon leaving the gym once the Marching Foxes had concluded, the audience was greeted by thunderstorms and heavy rain, causing many people to stare out into the dimly lit parking lot for a while, dreading the race that they would have to make to their car; but surely, the exquisite food and the excellent performances far outweighed the soaked clothing and made the evening an incredibly memorable and enjoyable one.